Incarcerated women are one of the fastest-growing groups in prisons worldwide. Women often face different needs and challenges than their male counterparts and inequalities in everything from access to education and vocational training to childcare and hygiene are increasing. In places with large inmate populations, programs are increasingly focusing on how to overcome these differences. Yarrow Global spoke to Chief of the Sector of Education and Training for the Prison Department in Paraná, Janaína Luz, in southern Brazil about the role of education for incarcerated women, how the coronavirus has affected the programs, and how she deals with issues of violence and inequality both inside and outside of the system.

Worldwide, more than 714,000 women and girls are in prison, according to the Institute for Criminal Policy Research. After the US, China, and Russia, Brazil has the next highest number of female inmates, at almost 50,000. And this number is growing worldwide at a much faster rate than male inmates. Around the world, the number of women and girls in prison has increased by more than 50% since the year 2000. In Brazil, the female inmate population has risen almost 5-fold since 2000 and with it, the unique problems and barriers facing women who enter and leave the system.

Janaína Luz, Chief of the Sector of Education and Training for the Prison Department in Paraná, knows these problems well. For over 10 years she has been helping to bring more and better educational opportunities to women in the 76 women’s prisons that exist in Paraná, one of Brazil’s southern-most states. Luz herself grew up in what she calls a “vulnerable” neighborhood outside of Curibita, one she describes as not being dissimilar to the neighborhoods many women who end up in the system come from. “I was born in a community with limited resources just outside Curitiba. It is a vulnerable community, where organized crime was omnipresent.”

Overall, female imprisonment has a high financial and social cost. Incarcerated women tend more often to be from more vulnerable populations, receive less family support than men in prison, and suffer greater income-related burden from criminal conviction than do men. Women in the criminal justice system are also more likely to be responsible for children than their male counterparts and have a greater statistical likelihood of experiencing physical and sexual trauma. Luz also sees this with the women she works with. She estimates that at least 90% of all of them have experienced violence in their past.

Similar to places like the USA, most women that get admitted to prison in Brazil are not there for violent crimes, rather they are imprisoned  for their involvement with narco-trafficking or property damage, often crimes committed together with their male partners. Effectively they are at the wrong place at the wrong time. But unlike their male counterparts, the support they receive once incarcerated is much less, and the stigma of being a formerly incarcerated person is much worse  when they are released.

“When you go to the prisons during visiting hours like on the weekend, the line for the men’s prison snakes around the block, filled with women waiting to see their partners. The line for the women’s prison is empty. Only a mother or a sister here and there. It is really quite sad,” says Luz.

For these reasons, education is fundamental to helping women after they have been released. “The only two tools that are effective in re-socializing [incarcerated women] are work and education,” says Luz. “Work and education, that is it.” In the Paraná Prison System, women are offered education and training from basic education through to professional qualifications in addition to sport, art Projects and culture. Prison units do not have physical classroom resources to accommodate a large number of people, she says. “The greatest success was the fact that we were able to offer courses and activities in person and at a distance (online or in print) to incarcerated women”. This makes it possible to study in classrooms and cells. 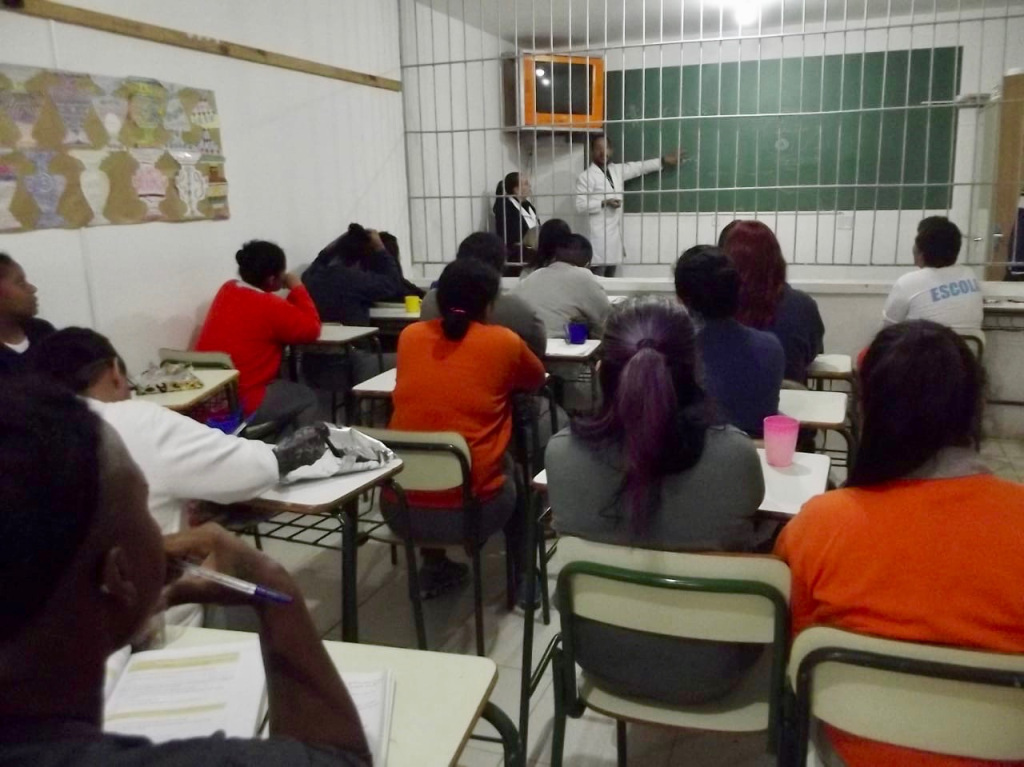 “Through strengthening this program, as well as joining several efforts and partnerships, we are close to reaching the goal of having 100% of women studying. But there are still many difficulties to be overcome” says Luz. The new coronavirus pandemic presented new difficulties for the education of women in prisons. Because of the pandemic, external teachers and instructors are unable to enter the prisons. In the face of this challenge, Luz and her team are thus trying to create other ways of serving this public of prisoners.

“Regardless of the crime that women committed, I see them as a full human being and respect them,” says Luz. It is a feeling that she brought with her to work outside the prison walls. In addition to her demanding work as a coordinator, Luz also does capoeira and runs a very successful capoeira program, focused on children in marginalized communities. “When I started teaching (in 2008), alongside my activities in prison, I was mainly practicing samba reggae, percussion classes and so on, in a marginalized community. But I was afraid, a lot of people told me that the released prisoners would recognize me and come after me. ”She stopped, but lost so much that she came back. And, she says, no one has ever threatened or bothered her. “When I’m in the marginalized community, I’m there as a capoeirista, meeting them eye to eye, and they feel that,” she says.

On top of her job in the penitentiary system and her social engagement in the communities, Luz recognized that more needed to be done on a policy-level to address many of the issues she sees in her community. She is now active in regional politics with the party PROS, focusing on the rights of women and marginalized communities with an emphasis on creating a system where everybody is able to lead a dignified life. The core principle behind all of her work is a strong dedication to human rights, something she says bleeds into all aspects of what she does, especially her work with the female prisoners. “They just realize I respect each and every prisoner for the person they are”.

Yarrow Global is a blog run by Yarrow Global Consulting gGmbH, a non-profit aimed at increasing gender equality worldwide. You can check us and our privacy policy out at www.yarrow-global-consulting.com